Jan 31 - Welcome to the home for real-time coverage of markets brought to you by Reuters reporters. You can share your thoughts with us at markets.research@thomsonreuters.com

"Last year’s EM volatility has persisted into 2022, but we believe compelling investment opportunities can be found on a selective basis — thanks to attractive relative valuations, potentially improved political and regulatory landscapes in certain markets, and various idiosyncratic factors."

Malik points to China, which is the largest component of the EM index, and says contributors to a bull case include monetary policy easing, as the U.S. is tightening, and the possible winding down of issues that derailed Chinese equities in 2021 including: regulatory intervention, the Evergrande crisis and Beijing’s zero-tolerance Covid policy.

Elsewhere in Asia, Nuveen favors countries like Taiwan and South Korea, saying that their strong banking and tech industries stand to benefit from rising rates and the ongoing global semiconductor supply shortage.

Finally, EM countries and regions with "bourgeoning consumer markets (such as India, Indonesia and parts of Latin America) may benefit from what’s expected to be diminished impact from Omicron compared to previous Covid variants."

Wall Street's chip index is rallying on Monday following its recent steep selloff, with all 30 of its components gaining, led by companies including Advanced Micro (AMD.O) and NXP Semiconductors (NXPI.O) ahead of their upcoming quarterly reports.

Semis have been a focal point in the recent unwind in growth stocks, with the Philadelphia Semiconductor Index (.SOX) now down 16% from its Dec record high close, worse than the Nasdaq's (.IXIC) 12% drop from its Nov record close. The chip index was up 3.5% on Monday at mid-day, versus the Nasdaq's 2.2% gain.

While growth stocks have suffered broadly from worries about rising interest rates, investors are also debating when the global chip shortage might ease, and whether companies are in danger of over-investing and getting caught in a downturn.

In one corner of the chip market, prices charged by scalpers for PC gaming graphics cards are showing signs of easing following over a year of empty shelves at retailers. For example, the average price on eBay for Nvidia's RTX 3090 recently fell to $2,551, down 8% from a few weeks earlier, according to Tom's Hardware. That's still incredibly expensive compared to Nvidia's suggested retail price of $1,499.

Nvidia (NVDA.O) rival Advanced Micro is up over 6% ahead of its quarterly report late on Tuesday. AMD remains down 22% so far in 2022.

Adding fuel to the chip industry debate, UBS upgraded Microchip Technology (MCHP.O) to "buy" from "neutral", saying the analog chip cycle is transitioning to an inventory build phase, but that it "still has legs", at least through 2022.

A quarterly report after the bell from NXP Semiconductors, a major supplier to the automotive industry, will offer investors another take on the global chip shortage. Its stock is last up 6%.

Wall Street tripped over its own feet as it stumbled through 2022's starting gate, with the SP 500 (.SPX) well on its way to its biggest January percentage drop in 13 years.

While the indexes are green last time we checked, in recent sessions they've been whipped about like an unlatched gate in a cyclone, and for that reason this post will focus on January sector performance as of Friday's close.

That last bit, specifically the buildup of Russian troops along the Ukrainian border, is responsible for the energy sector (.SPNY) being the sole gainer on the month.

And gain it did, surging more than 18% as the potential conflict raised concerns over crude supply read more . Energy stocks also have some ground to recover, as the long-term crude prices trend has been on a downward slope due to easing global demand, which plunged even further due to pandemic-related shutdowns.

As for the losers, a majority of the 11 major sectors in the SP 500 - six, to be exact - underperformed the broader index, with consumer discretionary (.SPLRCD), real estate (.SPLRCR) and tech (.SPLRCT) suffering the worst of it.

Industrials (.SPLRCI), as well as more defensive sectors, namely utilities (.SPLRCU), and consumer staples (.SPLRCS), and interest rate sensitive financials (.SPSY), in particular, while down on the month, fared better than the overall index as of Friday's closing levels. 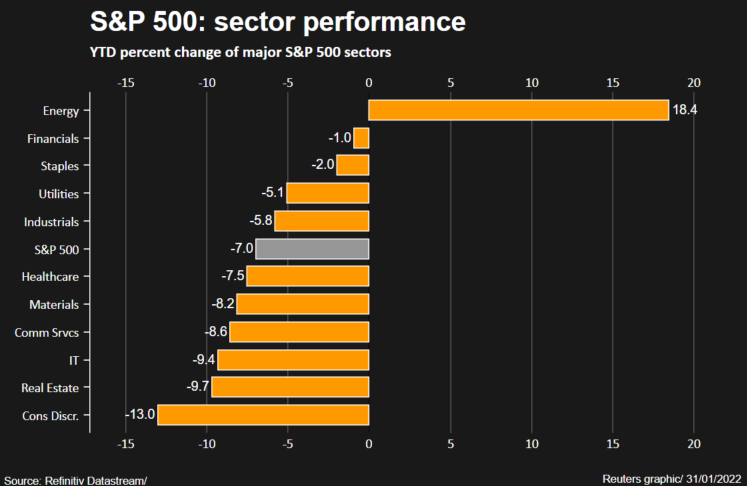 January ends with a modest daily rise of 0.7% for the pan-European STOXX 600 but the wild moves during the month seem to have set the stage for a new cycle centered on monetary tightening.

Today, Germany's 10-year government bond yield, the euro zone benchmark, jumped back to positive and reached its highest since May 2019.

As many strategists expected last year, growth stocks were dumped as bond yields rose and Europe's tech sector briefly went into a bear market during the month.

The tech index is now down heavy 17% from its November highs.

There was also little surprise to see banks, insurers, oil gas and miners pull off monthly gains as these stocks are widely expected to thrive when the direction of travel for interest rates is up and inflation goes up.

Adapting to a new macro environment is often a messy business so it was also not that surprising to see Europe's gauge of volatility reaching up to October 2020 highs during January.

Because Europe Inc is overweight in so-called value stocks, it was also reasonable to assume it would have an edge against Wall Street in January. And it did.

What constitutes arguably more of a surprise is London's FTSE 100 outperforming, with a rise of about 1%, while Paris, Frankfurt, Milan and Madrid lost some ground.

On Monday, gains in growth stocks, last up 1.3% were far outpacing value, which was essentially flat, but Marcelli is still arguing a preference for value over growth, even taking into account the possibility of "a short-term snapback in growth stock performance" with growth valuations lower than they were.

Marcelli points to normalization in monetary policy as the reason for the discrepancy between growth and value. Since speculative segments have been the biggest beneficiaries of Fed stimulus, which pushed valuations to very elevated levels, the CIO says "it shouldn’t be too surprising that growth stocks have suffered more than value stocks during the sell-off."

But broadly speaking she believes that "even though it’s hard to say if we have seen the bottom of this sell-off," equities will be higher over the coming months.

The reason is "a large disconnect between the carnage in markets and business fundamentals" which are still good. While results and guidance aren't as strong as recent quarters most companies are still beating consensus estimates, Marcelli notes.

The CIO points to a "tug-of-war in the market" with stimulus withdrawal at one end of the rope and "still-solid tech demand drivers on the other" suggesting that some growth babies are being the thrown out with the bath water.

So investors should remain overweight value, she notes.

The surge in natural gas prices in Europe has exposed how the tensions between the West and Russia over Ukraine could impact the recovery from the COVID-19 recession with governments struggling to shield consumers' energy bills.

A heatmap published by Principal Global Investors shows how countries which consume much more oil than they produce are at risk from further escalation should Russia decide to "weaponize its energy exports", analysts at the asset manager said. 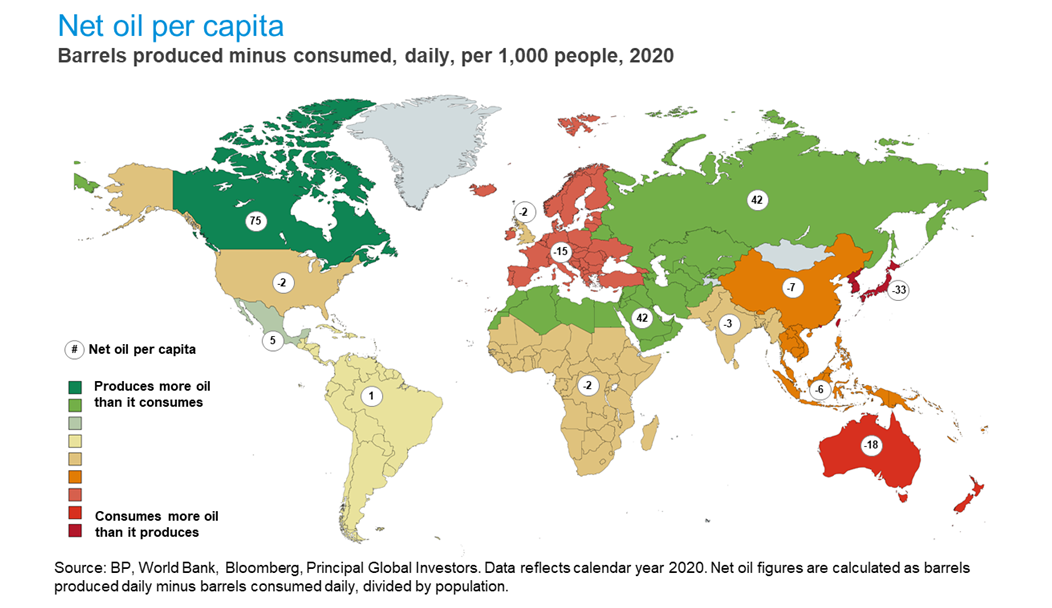 "East Asian and European countries consume more oil than they produce, such that higher energy prices will erode at consumer spending power", the research note read, also highlighting how "a heatmap for natural gas would paint an even tougher outlook for Europe".

"By contrast, United States oil production and consumption are more balanced, so the U.S. should be somewhat insulated—further support for U.S. equity outperformance vs. other developed markets in 2022", Principal Global Investors analysts also said.

Activity at factories in the U.S. Midwestern region defied expectations by gaining momentum in January

The Chicago purchasing managers' index (PMI) (USCPMI=ECI), courtesy of MNI Indicators, delivered a print of 65.2, indicating manufacturing expansion accelerated in the first month of 2022, rising from December's upwardly revised 64.3 and coming in well above the 61.7 consensus, which would have indicated a modest slowdown.

A PMI number above 50 signifies expanded activity over the previous month.

The index has been on a downward trend since May, when scarcity of supply amid booming demand began tossing buckets of cold water on factory expansion.

Supply scarcity has led to order backups and higher input costs, and a labor drought has been yet another headwind.

This, as consumer demand pivots away from goods toward services as economic activity slowly returns to pre-COVID 'normal.'

"The big picture for manufacturing is still favorable," writes Ian Shepherdson, chief economist at Pantheon Macroeconomics. "But the sector is nonetheless susceptible to disruptions from the Omicron wave, both at home and overseas, so a couple months of slower growth in activity and employment in the sector seem a decent bet."

Institute for Supply Management's (ISM) more broad, national PMI data expected on Tuesday, which analysts expect will come in at 57.5, a 1.1 point drop from the December reading.

As seen in the graphic below, the two indexes largely track each other, although ISM's country-wide data is understandably less volatile: 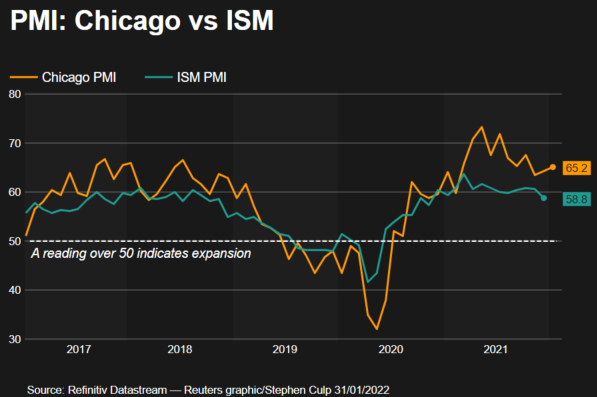 Wall Street appears to be determined to make up some ground lost so far this year as January draws to a close.

All three major U.S. stock indexes are green, with Tesla (TSLA.O), Apple (AAPL.O) and Amazon.com providing the biggest boost and putting the Nasdaq (.IXIC) out front.

Major U.S. indexes are rallying in the early throes of the last trading day of January. This after a month where investors backed away from stocks with lofty valuations amid aggressive rate hike bets and geopolitical tensions.

The Nasdaq Composite (.IXIC) is advancing on Monday, but with a more than 10% drop in January, the tech-heavy index is still eyeing its worst start to the year ever.

Here is your early-trade snapshot: 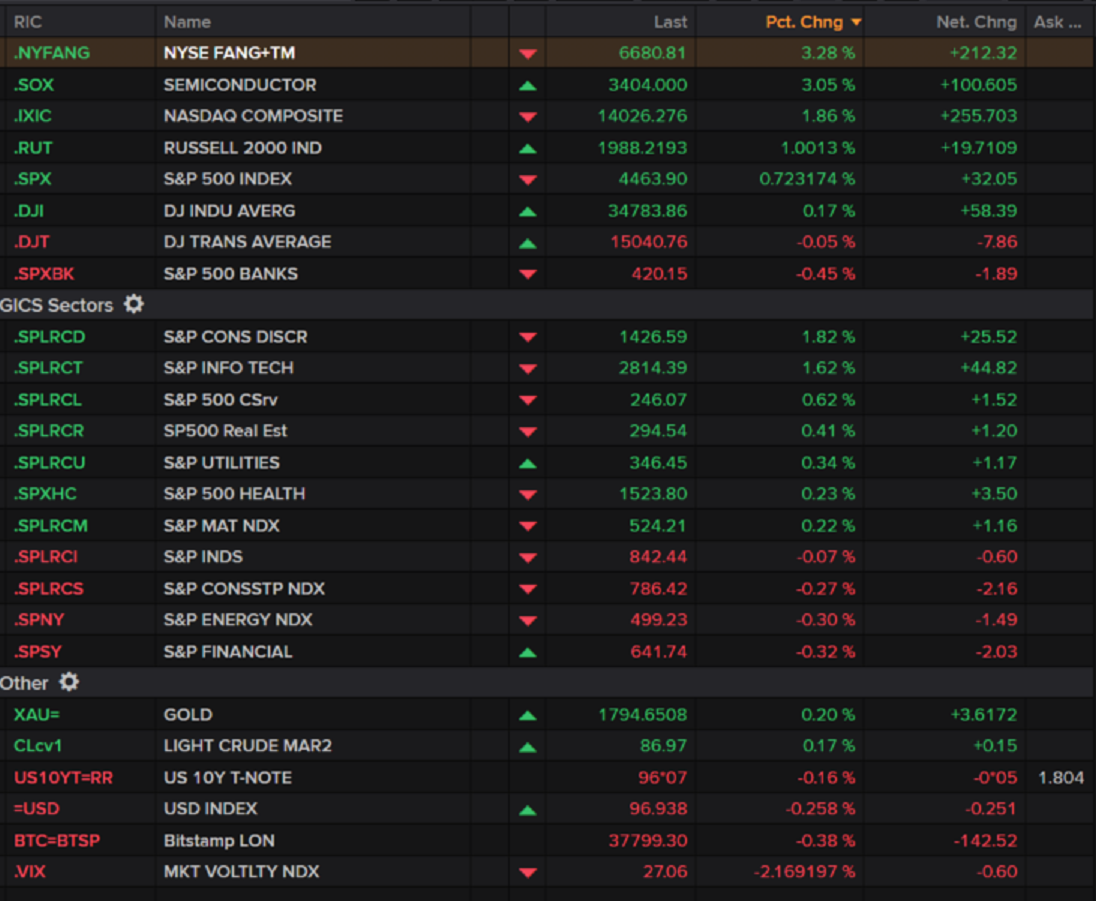 With a more than 20% swoon from its November 8, 2021 high, the small-cap Russell 2000 (.RUT) confirmed it has fallen into a bear market last week. The index was able to bounce on Friday, cutting its decline to 19.4% on a closing basis.

However, in premarket trade Monday, Russell 2000 e-mini futures are pointing to a RUT loss of around 0.7% at the open.

Meanwhile, the RUT's rising 200-week moving average (WMA), once again, appears to be beckoning on the downside: 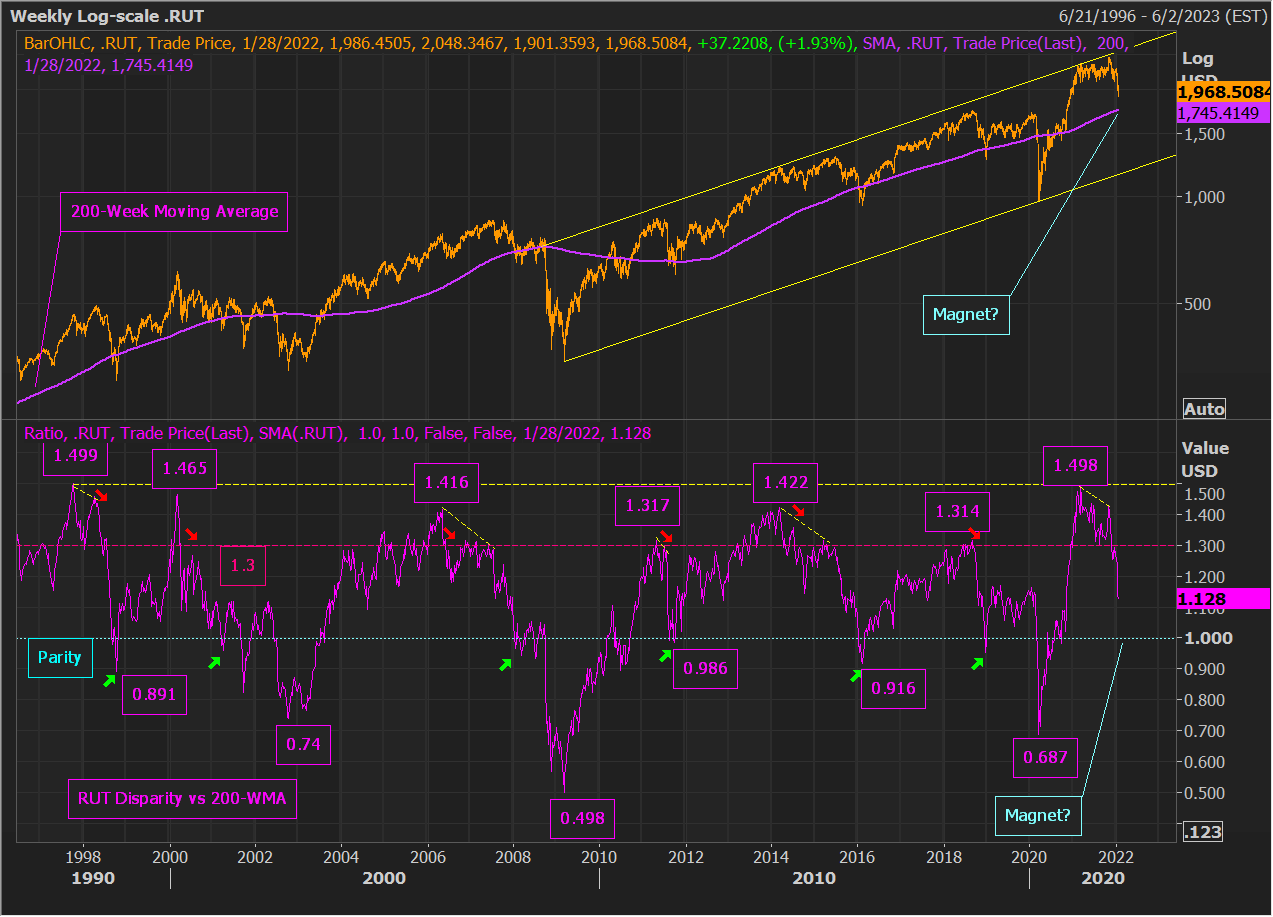 Of note, since 1997, and prior to 2021, there were six 200-week disparity peaks greater than 130%. In all six instances, the RUT ultimately fell to meet, and break, the long-term moving average before establishing some form of low.

The 200-WMA ended last week at 1,745 and is rising around 5 points per week. A deeper RUT decline to once again meet this long-term moving average in short order would put the index down around 28% from its November peak on a closing basis.

That said, it's always possible the RUT could churn around current levels, which would allow the moving average to catch up. With this sort of action, disparity readings would fall over time without, perhaps, a major dose of added pain for the RUT. read more

In any event, if the 200-WMA is to be tested, and violated, the RUT would appear to be in for, at a minimum, a further struggle whether it be in terms of price or time.

Terence Gabriel is a Reuters market analyst. The views expressed are his own